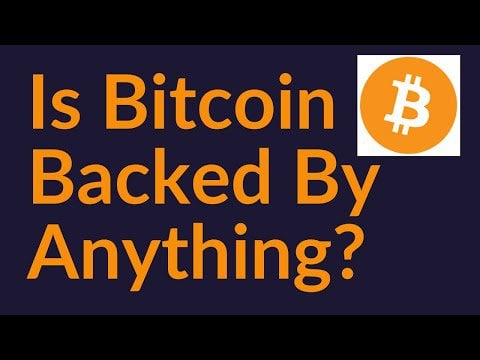 This is imho not true and a lot of people I think get this wrong.

**Why is it usually said that the dollar is (actually was) backed by gold?**

Because gold is hard money and an asset which is easy money has to be backed by hard money in order for it to have any sort of value.

Gold is backed by its fundamental properties:

* Not possible to replicate (possible but not affordable)
* Very hard and expensive to obtain (maximum 2% of the total stock is mined per year)
* Durability – doesn’t erode, so you can use the same gold in 1000 years

Now, with gold, there is to an extent a belief (in other people) part which makes it valuable.

* People “trust” governments or other people that there is no secret mine in the USA, Russia, or any other country, with trillions worth of gold, which is mined slowly so as to not overinflate the the supply. You can’t know for sure (for 100%) the official supply of gold. So people resort to “trust” in other people not to lie about this.
* People “trust” scientists not to create gold. Now, to be clear, we actually do know how to create gold, but it’s hugely complicated, expensive and dangerous, and produces gold only in extremely tiny quantities. If you wanted to make a hundred dollars worth of gold, it would probably cost millions or billions of dollars to do it, and would create a whole bunch of radioactive byproducts.
* People “trust” scientists which say there is no asteroid with trillions worth of gold which if would have fallen on the earth would drop the price of gold significantly.

**Let’s now look at what is Bitcoin backed by?**

Bitcoin is backed by its fundamental properties:

* Not possible to replicate (possible but not affordable)
* Hard and expensive to obtain (about 9% of the total supply is left to mine in the span of 120 years)
* Durability – doesn’t erode, so you can use the same bitcoin in 1000 years

Now, with Bitcoin, there is to an extent a belief (in other people) part which makes it valuable.

But again, I think this “trust” is not very productive to think about. Game theory, which is a mathematical discipline, implies that people will act so that they minimize their losses. Applying this to Bitcoin – people will not stop mining (hence validating the blockchain) bitcoin because there’s a mathematical guarantee that they will make money off of it. If the security is not changed in bitcoin, people will want to use to secure their assets (for various reasons). Now, as long as people are using it, there is an incentive to mine.

**Let’s take an informal look at the probabilities of gold or Bitcoin becoming useless:**

I included only the fundamental properties of Bitcoin which are the most important imo when defining hard money. A good medium of exchange has further properties like

If you compare Bitcoin to gold, Bitcoin can be considered as gold on steroids, as it has a vastly amount of advantages and properties that gold doesn’t have. But this isn’t exactly the point of my post.